Board of Arbitration and Conciliation for the Hosiery Trade

The mid-nineteenth century saw a period of prosperity in the knitting industry. Framework knitters were in demand and they were, therefore, able to lobby for higher wages. 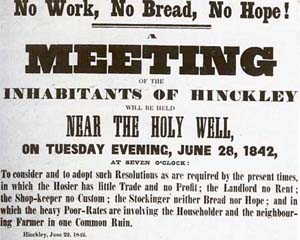 After a series of strikes in Nottingham in 1860, employers and employees agreed to discuss the situation and try to prevent further disputes between the two groups.  The employers wanted to avoid disruption to their supplies and framework knitters wanted to prevent the loss of wages.  A meeting was held at the recently formed Chamber of Commerce and the outcome of negotiations was the establishment of the Board of Arbitration and Conciliation of the Hosiery and Glove Trades.  The Board met for the first time on 3 December 1860.

The Board consisted of an equal number of representatives from both the manufacturers and the worker groups.  The number varied between seven and ten representatives on both sides.  Each member of the Board was elected for a one year term with the option of standing for re-election at the end of the term.  A president, vice president and two secretaries were elected from the Board at their annual meeting, to oversee the running of activities and reviews.

The main role of the Board was to resolve wage disputes between employers and the workers.  A committee of four Board members investigated complaints submitted in writing to the Board.  In most cases the appointed committee would resolve the matter, where this was not the case, a vote would be taken at a full meeting of the Board members.

The Nottingham based Board had members across Nottingham, Derby. Loughborough, and Belper.  It successfully managed to introduce a printed list of piecework prices, an achievement that framework knitters had been working for for over half a century.  The Board also managed to oversee a period of stability in the industry.  It policed the price list, resolved wage disputes, took action against the payment of truck, and created a list of frame rents.  Some companies did vary from the price list at times, but often other employers forced the guilty company back into line.

The workers benefited from reduced union strike levies as a result of the success of the Board.  The reduction in the number of strikes meant that less money was required to support workers on strike.  Sometimes in strike periods, weekly subscriptions reached 1 shilling 6 pence out of wages of between 12 and 24 shillings per week.  With strikes reduced in numbers, some workers only paid that rate for a year rather than for a week.

By 1866 Leicester had set up a board based on the Nottingham model.  This was followed in 1867 by a board for the lace industry in Nottingham.  With the foundation of many new organisations that covered different sectors and areas of the knitting industry the co-ordination of activities became difficult.  On 11 June 1866, the unions agreed to combine their activities and form the United Framework Knitters' Society.  The impact of the Society was, however, limited due the lack of involvement from representatives in the Leicester area.

The Nottingham and Leicester boards continued until the 1880s, when rapid changes in technology caused disputes amongst worker groups over pay rates and larger numbers of employers existed in the industry with whom to negotiate rates.  This created problems with the negotiation process and made the setting of price lists difficult.  The rise of overseas competition and a downturn in the British economy added pressure to the situation and helped to seal the fate of the boards.