Hand and machine knitted fabric is created by interlocking a series of loops. The loops (stitches) are interlocked using a needle to hold the existing loop while a new loop is formed in front of the old loop. 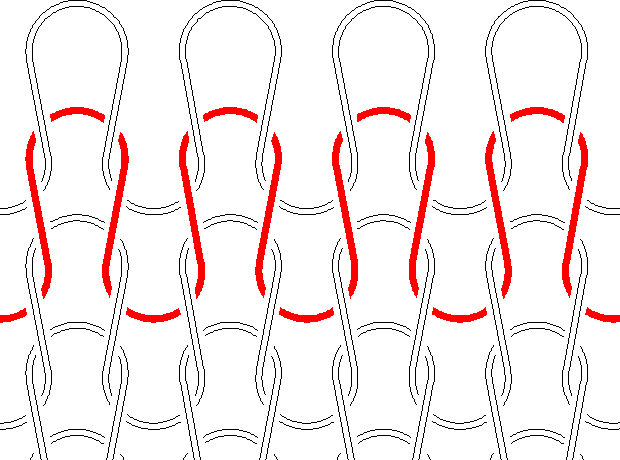 Graphic showing how the loops fit together.

The old loop is then brought over the new loop to form the fabric.  Knitting differs from weaving in that a single piece of yarn can be used to create fabric.  The fabric consists of horizontal rows known as courses and vertical columns of loops known as wales.

Knitted fabric has useful properties that make it suitable for a range of garments including tights, gloves, underwear and other close-fitting garments.  The loop structure of knitted fabric stretches and moulds to fit body shapes.  The air trapped by the loops keeps the wearer warm.

When knitting, increasing or decreasing the number of stitches in a row widens or narrows the garment being created.  Increasing is achieved by moving outer loops sideways on a frame and creating extra loops.  This process leaves a small eyelet hole in the fabric known as a fashioning mark.  When decreasing, the process is reversed and the loops move inwards.  This time the fashioning mark appears where two loops are compressed into one new loop.  Garments shaped in this way are known as fully-fashioned and regarded as high quality.  Occasionally some firms used fake fashioning marks to make garments appear to be fully-fashioned.

If yarn in a traditional knitted fabric breaks, the loops unravel and a run or ladder forms.  To overcome the problem, and also to sell more goods, knitters worked to design new fabric structures that were less dependent on individual loops for their strength and unlikely to run if a thread broke.  Hexagonal meshes, micro-mesh, non-run, run-proof and similar fabrics were introduced and appreciated by consumers.

When did knitting start?

The earliest looped fabrics may have been produced in the Middle East.  Socks recovered from fourth century tombs in Egypt were made using a form of looping known as nalbinding.  Nalbinding uses a single sewing needle to make the loops instead of two knitting needles.  Further examples from Egypt date from the seventh century and show loop patterns that suggest they were knitted in the traditional hand knitting manner with two needles.

In Spain knitted cushions have been found in tombs dating from the thirteenth century.  Purses for holding religious relics, gloves worn during religious ceremonies and knitted girdles are also known from this period.  Peasant knitting of similar date has been recovered from a Polish cemetery.

Four surviving paintings from the fourteenth century show the Virgin Mary knitting, suggesting that the craft was a familiar activity for women.  A rising demand for knitted caps led to the development of the English hand knitting industry.  References to Coventry cappers were first recorded in 1424.  In 1488 the Cappers' Act was passed by Parliament to fix the prices of caps and prevent cappers making excessive profits.  By Tudor times caps were flat with a narrow brim.

In the sixteenth century, an almost insatiable demand for knitted stockings further stimulated the young industry.